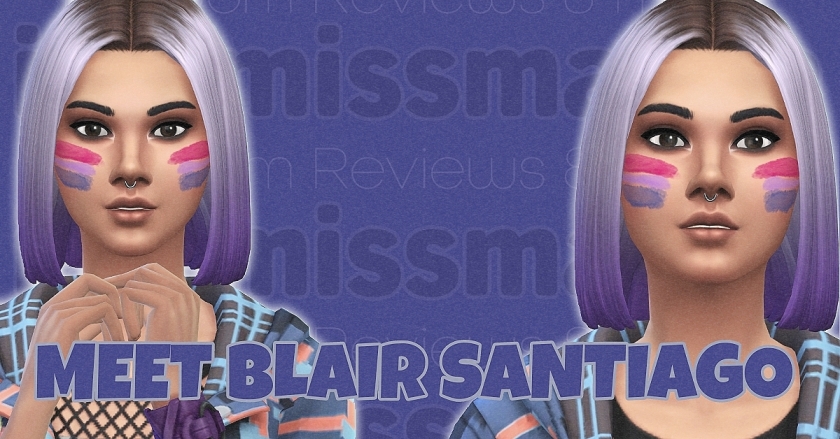 For Pride month I thought that that I would show you the sims in my game that are part of the LGBTQ+ community and write out a profile on them, while also giving you an insight of what their story is within my game.

I originally wanted Cassandra and Harvey Santiago to have one child but when I sent them on their honeymoon, Cassie found out that she was eating for two. Thus Blair Santiago was born into the family.

As I already had a story planned for thier first child Jessica, I was struggling to come up with a plan for Blair’s life. In the end, I decided to see what she would do.

Dislikes: The colours orange and yellow, blues and classical music

Born into the Santiago family, Blair lived in Evergreen Harbor for most of her childhood. Her mother Cassie had spent most of her young adult life creating a thriving community in Port Promise before she even started thinking about having children.

Blair has always been an adventurous sim who loves to try new things, whether that be snowboarding or skiing. Her parents Cassie and Harvey started to go on annual trips to Mt. Komorebi and practice their skiing and snowboarding skills. When Blair and her older sister Jessica both became children, Cassie and Harvey took them on their first trip there. Blair took a liking to snowboarding and Jessica took a liking to skiing. It wasn’t until the second time that Blair decided she wanted to also try skiing. Since that day, everytime they go to Mt Komorebi, Blair spends all the holiday practicing.

Blair has just become a teenager and is still that adventurous sim and is now planning to her very first Mountain Excursion with her friends. She has already begun training and hopefully will complete the excursion before she ages into a young adult.